Sarah Hyland and boyfriend Wells Adams have been living it up in luxury during their romantic Mexican vacation.

As PageSix.com reported Tuesday, the lovebirds have been enjoying the delights of the Karisma resort, El Dorado Maroma in The Palafitos where they’ve been soaking up the sun for several days.

The actress and the radio host, who have been dating since last October, are reported to have stayed in a $9,500-a-week overwater bungalow with glass floors, an indoor jacuzzi and a private infinity pool. 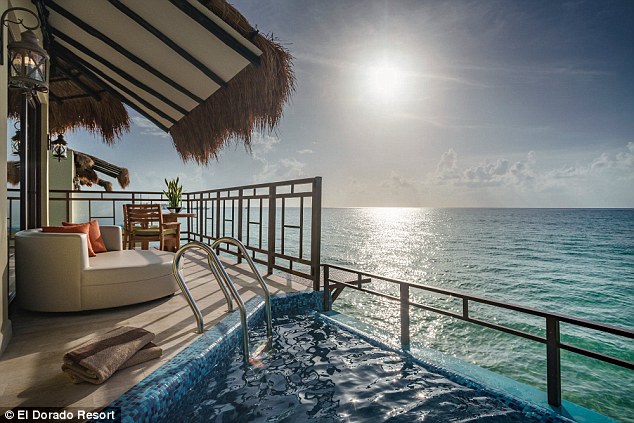 Hyland, 27, and Adams, 33, dined at the resort’s restaurant, enjoyed karaoke and watched fire dancers perform on the beach, the gossip website said.

The Modern Family actress and The Bachelorette alum also sailed aboard a private catamaran. 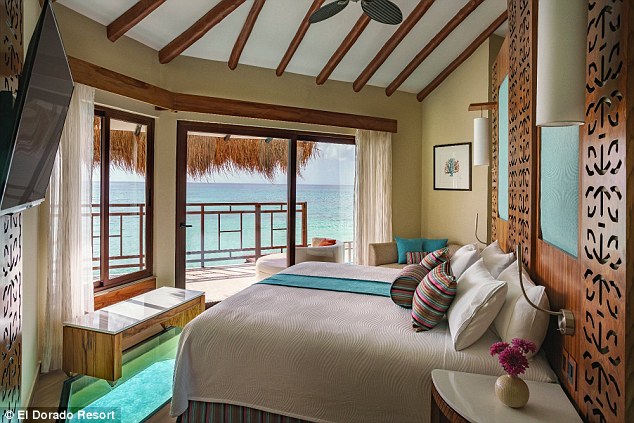 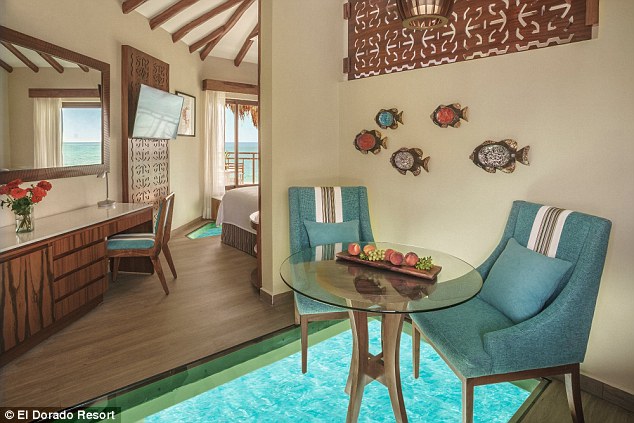 Adams recently revealed he’s leaving Nashville, Tennessee, where he’s a radio host, and is moving to Los Angeles to be with his actress girlfriend Sarah Hyland.

The former reality star shared his big news about moving in with the Modern Family star during Friday’s episode of the podcast he does with Miley Cyrus’s sister Brandi.

‘Should I just say it? I guess it’s going to come out after, it doesn’t even matter,’ he said on Your Favorite Thing. ‘I’m straight up moving to L.A.’

He went on: ‘First thought is: Let’s go to California. Let’s move in with the lady.’

‘If we’re going to take the next step, this is the first step we’ve got to take to decide if we can handle living with one another, you know?’ he added.

Sarah Jane Hyland (born November 24, 1990) is an American actress and singer. Born in Manhattan, she attended the Professional Performing Arts School, then had small roles in the films Private Parts (1997), Annie (1999), and Blind Date (2007). She is best known for playing Haley Dunphy in the ABC sitcom Modern Family (2009–2020), for which she received critical acclaim and numerous accolades, including four Screen Actors Guild Awards for Outstanding Performance by an Ensemble in a Comedy Series, and a Critics’ Choice Television Award nomination for Best Supporting Actress in a Comedy Series.

Latest Video
Current Projects
Lady Parts (2020-)
Sarah as Host
Filming Season 2
Nothing is off limits as Sarah and Dr. Sherry engage a panel of celebrity guests to break taboos surrounding female health, sexuality, experiences, and more! Prepare to learn more than you ever thought you needed (or wanted) to know about lady parts.
news ― streaming ― images

Sourse (2022)
Sarah as Co-Founder/Creative Director
Available
Sourse, makers of the first vitamin-infused chocolate with clinically-backed dosage guidelines and ingredients proven to revitalize the way you look and feel, announced today the appointment of actress and health advocate Sarah Hyland as the brand’s new Co-Founder and Creative Director.
news ― shop ― images

My Fake Boyfriend (2022)
Sarah as Kelly
Available on Prime Video
A young man in a tricky situation, who follows the advice of his unconventional best friend and uses social media to create a fake boyfriend to keep his awful ex-lover out of his life. But everything backfires when he meets the real love of his life, and breaking up with his fake boyfriend proves hard to do.

Love Island USA (2022)
Sarah as Host
Finished
Love Island is a reality television program in which a group of contestants, who are referred to as “Islanders”, are living in a villa in Hawaii. The Islanders are cut off from the outside world and are under constant video surveillance. To survive in the villa, the Islanders must be in a relationship with another Islander. The Islanders couple up for the first time on first impressions but they are later forced to “re-couple” at special ceremonies in which they can choose to remain with their current partners or to switch partners.

Pitch Perfect: Bumper in Berlin (2022)
Sarah as Heidi
Post-production
The Pitch Perfect show is set several years after the movies and sees Bumper move to Germany to revive his music career after one of his songs becomes big in Berlin, with Piëter becoming his agent.

Yours, Mine & Paul’s (TBA)
Sarah as Lauren
Pre-production
Lauren agrees to be a surrogate for her best friend, Paul, and his husband, Xander. There’s just one problem: Lauren and Xander hate each other. Oh, also Paul dies in the cold open.

Sarah Hyland Web is a non-official site for Sarah’s fans. We have no contact with the actress herself, her family or someone close to her. This site is non-profit, and is in no way trying to infringe on the copyrights or businesses of any of the entities. All materials published on the Site (including, but not limited to articles, photographs, images, illustrations, product descriptions, audio clips and video clips are protected by copyright, trademark and all other applicable intellectual property laws, and are owned or controlled by sarah-hyland.org unless stated otherwise. Images and videos credits go to their respectives owners, please contact us if there’s a problem, before taking any legal actions.